Temel Hazıroğlu was born in 1955 in Trabzon. He settled in Istanbul with his family and completed his primary and secondary education there. He graduated from Kabataş Boys' High School. He graduated from Istanbul Technical University, Department of Mathematical Engineering. He completed his master's degree at Istanbul Sabahattin Zaim University, Department of Business Administration.

He still continues to be an Advisory Board Member of the Participation Banks Association of Turkey (TKBB) since he was elected in May 2018. Hazıroğlu has been teaching as a guest lecturer to graduate students at Marmara University Institute of the Middle East and Islamic Countries Studies since 2016. He is doing a PhD in sociology.

Hazıroğlu gave conferences and seminars in many universities, high schools, foundations, associations, and organizations. He attended many symposiums and panels as a speaker. He worked in various foundations, associations, and organisations. His articles and papers about the current political, economic, and social structure have been published in various journals and newspapers. He has four books published called “İnsan ve Gerçek”, (Human and Truth) “Yeni Arayış ve İleri Demokrasi Fikrinin Doğuşu”, (The New Quest and the Birth of the Concept of Advanced Democracy) “Katılım Ekonomisi”, (Participation Economics) and “Yüceliş" (Exaltation). Temel Hazıroğlu is married and has three children. 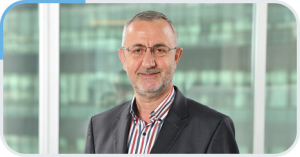 Cookies are used on our site to provide you with a better service. For detailed information, you can review our cookie clarification text.